So, this post is supposed to be a reflection on our time at the ELCA Youth Gathering in Detroit, July 15 – 19. I’m gonna come straight out and say that it’s probably going to take me several posts to reflect on this trip. The shortest reaction I can give you is this: It was awesome!

There were 8 of us who went on the trip from our congregation. I’m guessing that if you asked all 8 of us what made the experience great, you’d get 8 answers. (By the way, let me encourage you to do that – ask all 8 of us! We are going to put together some sort of summary of the trip in the very near future. Traditionally this has been a youth-led worship service. That may still be in the cards; however, it may be something else. Since we got back, none of us have been in the same place at the same time to really plan what this is going to look like.)

Since I can’t claim anybody else’s experiences, I’ll give you some of the reasons I loved our time together. Here they are, in no particular order:

1. We were in DETROIT! This is my hometown. My relationship with Detroit is … complicated. I haven’t lived in the Metro area since April of 2001.

But it was great to get back there. It was a huge blessing to have had outstanding weather most of the time. It was a super cool experience for me to take the ladies to my old stomping grounds (Greenfield Village), where I cut my teeth in the museum biz, where I have made some of my most lasting friendships and memories. Asha got licked by a calf while we were there. 🙂

2. The people of Detroit were totally excited to have us there. I have to say that on Day 1 of the Gathering, as 30,000 of us in our colorful Tee-shirts were trying to make our way from Cobo Arena to Ford Field (about a mile away), struggling to find food along the way, people were befuddled by us. “Who are all these kids with their multicolored garb, their high fives, their ‘insufferable cheerful[ness]?!” (A now famous expression made popular by this article was, “It looks like a Skittles factory exploded!”) But after that first day, the “regular folks,” including the police, Tigers fans on the way to a game, dudes driving by in their cars, people who work downtown – almost all of them were super enthusiastic about our being there. There were more high fives than one can reasonably imagine. People driving by or pedalling past on their bikes would shout, “Thank you!” A few of them, by the very end, had caught on and would holler, “Rise Up!”

3. We got to do some much-needed service in a town that suffers from some pretty abysmal self-esteem. Every group who came to the Gathering was signed up for a day of Service. These were staggered over the 3 days, so that each day, about 10,000 people were deployed in Detroit to work on 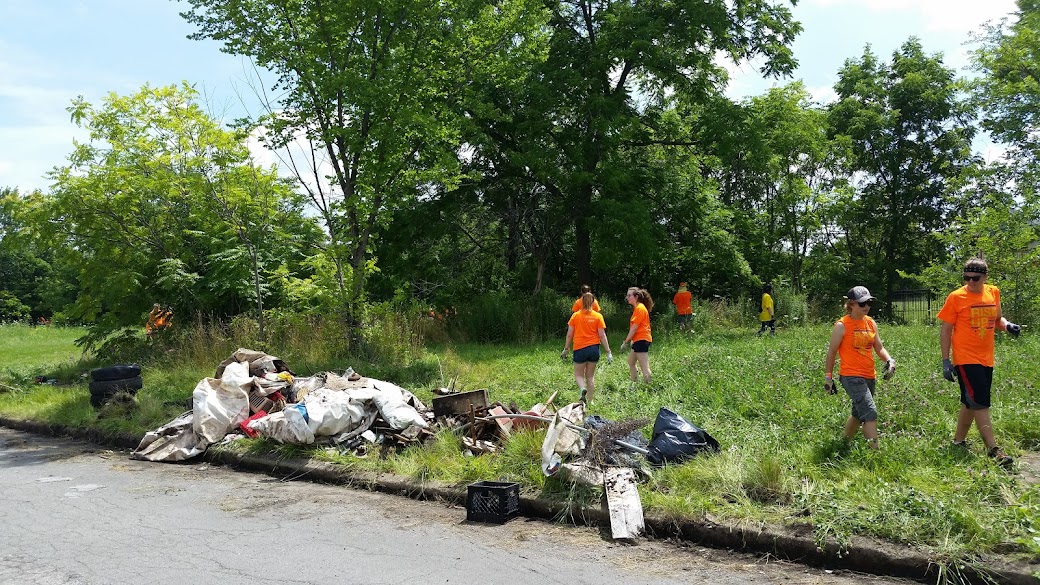 painting buildings, clearing lots (that was us), board up vacant/abandoned homes, etc. We went to an area where people had just been dumping trash in vacant lots in this neighborhood adjacent to a retirement home. We cleared brush, garbage, cinder blocks, dentures (don’t ask), you name it. This made it safe for a brush hog to come in and mow without getting its blades all chewed up. There are long-term plans for these neighborhoods, but in the meantime, the city just wants them looking a bit more presentable and less … menacing.

The specific area we worked on belongs to a project run by Focus:HOPE. It’s a project called “Keep it 100!” I encourage you to follow the link, but the basic rundown is that they are working on revitalizing and beautifying a 100-block area in an incredibly blighted part of the city, trying to make it livable again.

4. This one is about the girls, and I don’t want to betray any confidences, but I will say this: I learned that at the very least one of our girls is a courageous leader. I think they all are, but one in particular stands out. They say it takes courage to stand up to your enemies, but it takes a special kind of courage to stand up to your friends. I saw one of the young ladies do just that – she made a decision that wasn’t very popular, but it was right, and she stood by it. That makes me very, very proud. (Who’s cutting onions in here?) I also saw a moment of transformation where one of the young women, whom I would describe as fairly shy (at least in my experience) seat herself on the bus so that she could meet new people. I have once instance of this that comes to mind, but now that I think of it, it happened over and over. The girls were eager to meet new people and share experiences. It was just really moving to witness. (Onions again?!)

5-10. There are a bajillion reasons this trip was great. We heard Detroit spoken word artist Natasha “T” Miller deliver a beautiful poem about her city; We saw the Temptations, for crying out loud! We ate a lot of interesting food. (Can you say, “Opa!”?) We went out for pizza with my mom and some of her friends! I got to try the new Faygo Rock & Rye Slurpee at 7 11. I mean, it was really cool, all around. The worship was good and gave us some ideas (watch out! “Gospel/Blues liturgy,” people!). It’s just too much. I’m still processing it all, and imagine I will be for a long time coming.

OK, I’ll shut up. For now. But there’s more to come, I’m sure. Especially as we think of ways to RiseUpTogether here in Tulsa.

I'm a baker's dozen years or so into this "professional ministry gig" (if you count seminary), and still kind of wonder how the heck I got here. I'm currently serving as pastor of a fantastic, wonderful, faithful congregation in Cape Coral, Florida. That's a story in itself. I'm also serving as honorary pastor/chaplain for the German American Social Club in Cape Coral and for the Evangelische Kirke/German Ministry, Inc. in town. Recently moved from pastoring a weirdly wonderful congregation in Tulsa, OK. That first call ran from 2012 to 2021. All three congregations are many literal and cultural miles removed from my home in one of Detroit's first-ring suburbs. As a holdover from a previous life, I'm a recovering museum nerd, having somewhat accidentally chosen living history museum work as my first career post-military. Temperamentally, I'm an INFP (according to the MBTI) and a Self-Preserving 4-6-8 Enneagram Tri-type, but that 6 might actually be more dominant than the 4. Still working all that out. As is my family: wife, 2 lovely children (a boy and a girl), a Yellow Lab named Sunny, and 3 domestic shorthair cats (Otto, Oscar, and Miss Juniper Cleopatra Tiana Martin). View all posts by Robertchen

This site uses Akismet to reduce spam. Learn how your comment data is processed.